When did FoxTrot first start?
FoxTrot launched in newspapers on Sunday, April 10, 1988.

Why is the strip only published on Sundays now? It used to be every day.
At the end of 2006, Bill decided to cut back on his cartooning workload to both preserve his sanity and allow time for other things.

My newspaper doesn’t carry FoxTrot. Can you get them to run it?
Readers have far more sway with newspaper editors than cartoonists and syndicates do. If you call or write the newspaper’s features department, odds are good they’ll take note of your request. They may not choose to act on it (or be able to, depending on territorial rights issues), but it doesn’t hurt to ask.

The strip had an error in it. Should I let Bill Amend know he’s a moron?
Yes, please! Gently, though. We don’t want Amend quitting for good.

Why the title “FoxTrot”?
Bill liked the combination of a short name for the family (takes up less space in the dialogue balloons) and using a dance as a metaphor for the interactions between his characters.

Where do the characters live?
It’s never been established. Presumably somewhere in the US where it snows in the winter and gets hot in the summer.

Why don’t the characters ever age?
Bill picked the character’s ages when he started FoxTrot for specific reasons and he feels that aging them, especially the kids, would change the whole dynamic and character of the strip. Besides, who wants to see a more mature Jason?

What happened to Denise?
People ask this a lot. Denise was Peter’s blind girlfriend and a popular character who was in the strip a fair amount until she wasn’t. Bill says her phase out wasn’t intentional but rather just came about due to a gradual shift in the things he wanted to write about and that once she’d been out of the strip for a couple years, it became awkward to bring her back. It’d be nice if Bill figured out a way to reintroduce Denise at some point, as we really liked her character, but we aren’t holding our breath.

How do I locate a particular strip that ran a while back?
Andrews McMeel Syndication has a searchable database that is somewhat clunky and imperfect and doesn’t include some older material, but it’s currently the best way to hunt down old FoxTrot strips that we know of.

I’m a teacher and would like to include a few strips on handouts or on my class web page. Is that okay?
More than likely, yes. Check the Educational Re-Use info page for guidelines.

When will the next book come out?
Believe it or not, we don’t always know. But rest assured that anytime a new book is for sure on the horizon, we’ll post info about it on this site.

How old is Bill?
Super duper crazy old. He was born in 1962, so you can figure it out from that.

Where did he grow up?
Bill lived near Boston during his Jason Fox years, and in the San Francisco Bay Area during his Paige and Peter years.

Where does he live now?
Missouri.

How do I get in touch with him?
See the contact page. Keep in mind that Bill can’t promise a reply.

I need to do a report on cartooning for school. Can I send Bill Amend a long list of questions and get them answered right away? The report is due tomorrow.
You know, someone like Jim Davis probably knows LOTS more about cartooning than stupid Bill Amend does…

I read that Bill majored in physics. True?
Yup. He earned a BA in physics from Amherst College in 1984.

What video games does Bill play?
Bill doesn’t play a lot of games currently. Occasionally he’ll play World of Warcraft or Starcraft 2 or DotA 2 on his Mac. He keeps his character/player names secret.

Having followed Bill on Twitter for a while, I get the impression that he listens to an unhealthy amount of Bruce Springsteen music. I guess that’s not really a question, more of a concerned observation.
Noted.

Did he always want to be a cartoonist?
Bill started drawing cartoons for fun when he was in fourth grade, but didn’t really think about doing it professionally until after college.

I’m trying to do a comic strip of my own. If I write to Bill, will he look at my stuff and give me advice?
Bill tries to avoid critiquing aspiring cartoonist’s work. His general advice to young cartoonists is to learn everything you can in school, draw for fun, contribute to school publications, then when it’s time to try a strip for real, write and draw things that you think are better in some way than what’s already out there.

Is it true that Bill once skinny dipped with Stephan Pastis at 1:00 am in a Florida hotel pool?
Not true. They were in their underwear.

How long does it take to draw each strip?
Once a Sunday strip is written, it usually takes Bill about four hours to draw and color the strip.

Where does Bill get his ideas?
From coffee and deadline panic, mostly. It’s a really unpredictable process filled with lots and lots of imagining and writing and cursing and scribbling and more cursing and revising and then hopefully in the end a small “Eureka!”

How far in advance are the strips written/drawn?
About six weeks. Newspapers like the option to print their Sunday comics well in advance so they can wrap them in ads.

Is FoxTrot drawn on paper or on a computer?
Bill drew his Sunday strips on paper up until about midway through 2010 when he switched to using a digital tablet.

Why doesn’t the foxtrot.com archive go back farther?
We’re working on it.

The Jason Fox Math Quizzer app only runs on iOS devices. Will there be an Android version?
It’s unlikely. Just getting the one working version out the door was a minor miracle. 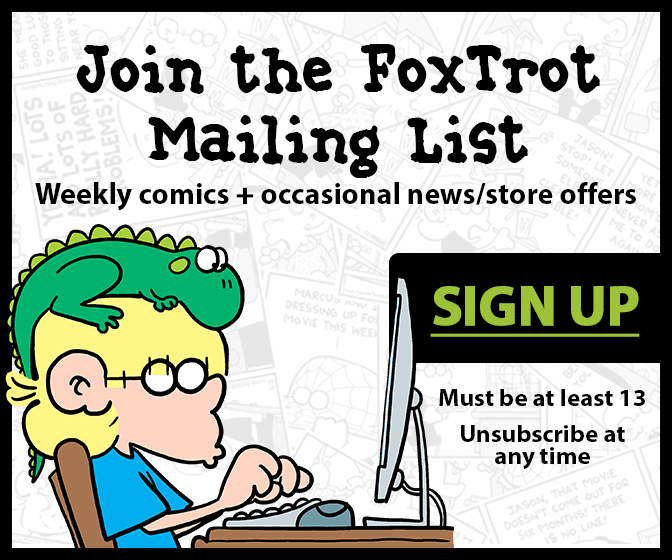 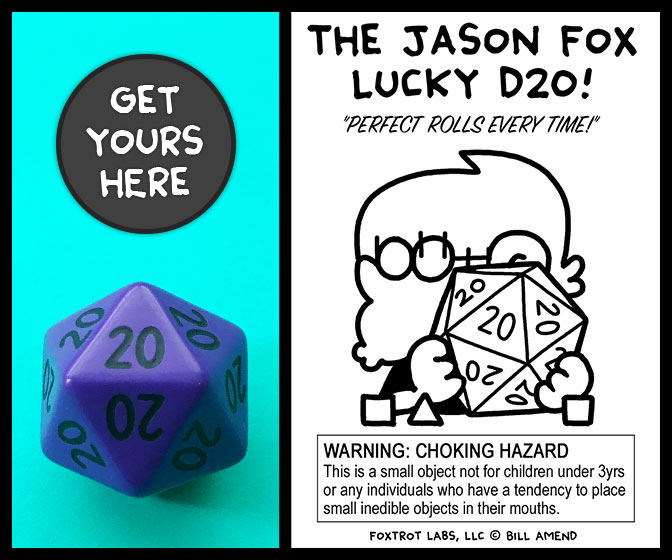